The team evolves at the chemistry-biology interface in a framework of collaborations with academic partners, in particular from Inserm, and pharmaceutical companies. Interfaced projects in Biology/Health, include protein-protein interactions, immunotherapy and cell targeting, for applications in the fields of cancer, infectious and parasitic diseases, and the central nervous system as well.

The team has complementary expertises to meet these objectives that combine the modelling analysis of recognition and biological interaction processes, with the «design» of new molecular structures with biological activity, in view of fundamental and therapeutic applications.

In 2016, for a period of 5 years, The « Région Pays de la Loire » and its 3 Universities provided support for the PIRAMID project. This program involves 12 Research teams (5 in synthesis, 2 in modelling and 5 in biology) in order to identify new drug candidates for the treatment of pathologies in oncology, immunology, cardiovascular, and anti-infectives by targeting protein-protein interactions by rational approaches. Our projects are based on the constructive interdisciplinary collaboration of biologists, computational and medicinal chemists from the participating teams that gather all the skills and expertise required for the success of our strategy.

SYMBIOSE team is directly involved in 3 of these projects which are presented below.

A. Overcoming tumor resistance to chemo-or radiotherapy with Rad51 modulators

DNA repair process is particularly important in maintaining genomic integrity. In proliferative disease therapies such as radiotherapy or chemotherapy, this process can restore the DNA damaged with the treatment, making cancer cells less vulnerable. Homologous recombination (HR) is one of the two cellular pathways that repair DNA double-strand breacks. HR is catalysed with Rad51 a hightly conserved protein overexpressed in a wide varieties of cancer and consequently contributing to drug resistance. That’s why Rad51 DNA-repair blockage either indirectly or directly by small molecules is relevant especially to improve response to radio- or chemotherapy treatment. The stilbene derivative DIDS was identified as a direct inhibitor of Rad51, but suffered from restrictions such as specificity and stability.

As part of the PIRAMID network and in collaboration with our biologist partner (UFIP, Nantes), we have developed two series of DIDS analogs, which have been studied in vitro and in cellulo. Two molecules have shown HR activity in the range of the micromolar and one of them has proved to sensitize DU145 cells to treatment with cisplatin. In vivo evaluations are now in progress.

B. Identification and development of small MW molecules as agonists or antagonists of the IL-15 system

Cytokines are key mediators involved in the regulation of the normal immune response. IL-15, a cytokine discovered in 1994, belongs to the IL-2 family, and IL-15 receptor shares the IL-2/15R (b) and gamma (gc) chains with the IL-2 receptor. Both cytokines have similar functions such as the stimulation of T cell proliferation, the generation of cytotoxic T lymphocytes and NK cells.

Therefore, dysregulation of cytokine expression has a complex role in the pathogenesis of autoimmune diseases and so elevated IL-15 levels have been reported in inflammatory diseases, including rheumatoid arthritis, lupus, multiple sclerosis, and inflammatory bowel disease. Indeed, potent small-molecule inhibitors of the IL-2/IL-2Ra interface have already been identified using fragment-based approaches or library screening combined with chemistry optimization. Recently we aimed to discover such low MW non-peptidic inhibitor, by targeting the IL-15/b interface.

For the purpose, a pharmacophore based on specific “hot spots” at the IL-15/b interface was designed and used for a docking based virtual screening of various chemical databases. After experimental in vitro studies, one hit was chosen among high-scoring selected compounds and chemical optimization of its structure, led to one heat with sub-micromolar activity (pStat5).

In fact, if we identified the first small MW inhibitors towards IL-15/IL-15R system the lack of selectivity versus IL-2 was observed and still remained challenging.  We now focussed our study on pertinent structural observations on the IL-15 gc chain, not shared with other members of the IL-2 family to identify and develop seelctive IL15 inhibitors, with similar approach. 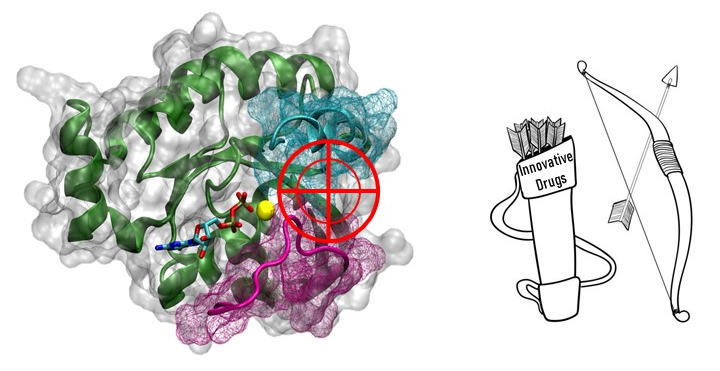 There is an increasing body of evidence supporting a causal role of aberrant activity of small GTPases of the Rho protein family in human diseases including cancers, neuronal disorders, pulmonary and cardiovascular diseases, thus identifying Rho protein signaling cascades as potential targets for new therapeutic strategies.

Our project is based on the constructive interdisciplinary collaboration of biologists, computational and medicinal chemists from the participating teams that gather all the skills and expertise required for the success of our strategy. Our strategy consists in 1) identifying the key amino acid residues involved in the binding interfaces, 2) using these informations to process in silico ligands screening, 3) purchasing or synthesizing best hits, 4) assessing their ability to inhibit Rac1 or RhoA activity by relevant biochemical/biological in vitro assays, 5) modifyng by structural optimization of the best hits to enhance their affinity and their inhibitory potency.

2. Development of innovative nucleosides and nucleotides

Nucleosides are molecules with various applications in therapy (genomic, infectious and anticancer). For many years, our team has been interested in the synthesis of nucleoside analogues by modification of the ribosyl cycle or of the nucleic base. Our investment also focused on the modification of the internucleotide linker. Thus a new synthetic route to access to ribonucleotide dimers with an amide linker has been developed from D-Xylose (J. Org. Chem. 2016).

Since 2015, in collaboration with pharmaceutical companies, we have offered our know-how in this field for the development of original molecules with potential antiviral profile, as for example analogs of Ribavirin or Remdesivir, as molecules with a broad antiviral spectrum, and plausible efficiency in particular on Hepatitis (HV), Ebola virus (EBOV) and coronavirus (SARS/MERS-CoV). 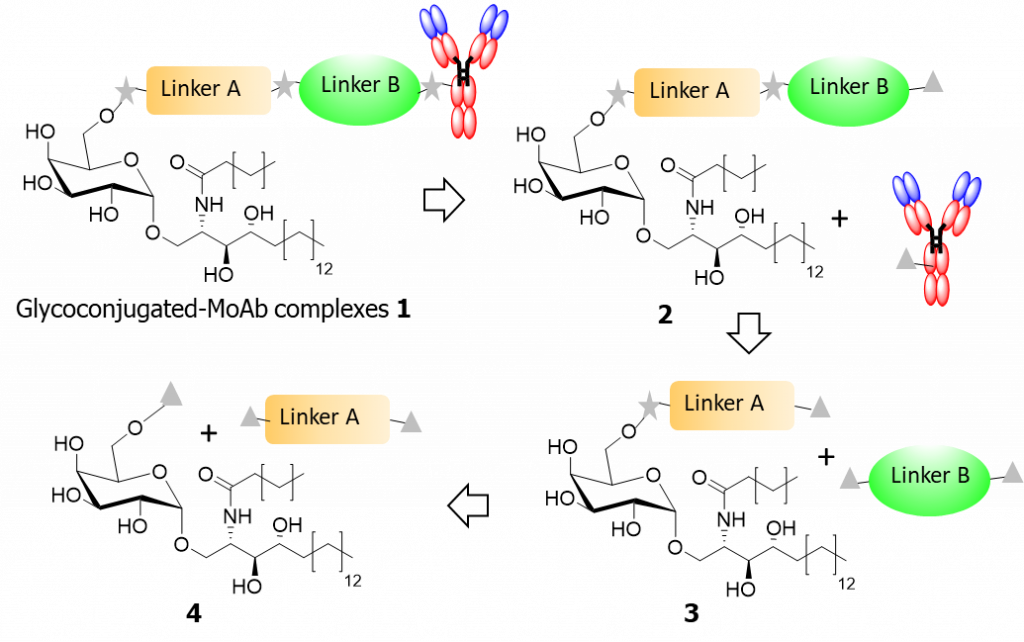 The use of anti-EGFR Monoclonal Antibodies (MoAbs) is nowadays part of the treatment algorithm in RAS wild-type colorectal cancer, head and neck cancer since its approval by the regulation agencies. Their activity has also been demonstrated in Non-Small-Cell Lung cancer. In addition to interfering with signal transduction along the EGFR pathway, MoAbs also have demonstrated immune properties like Antibody Dependent Cell Cytotoxicity (ADCC) for Cetuximab or Complement Dependent Cytotoxicity (CDC) for Panitumumab. However, the impact of such immune functions remains unknown and, if activated in cancer patients, they are not sufficient for disease control as reflected by an absence of objective response in KRAS mutant colorectal cancer.

Over the past years, many approaches have been developed with the goal of improving the therapeutic index of anticancer agents. Numerous research efforts have concentrated on conjugating anticancer drugs with a wide spectrum of carriers: sugars, vitamins, peptides, synthetic polymers and antibody. As a general statement, the resulting carrier-drug conjugates were designed in order to allow: (1) the transport in the body of potent anticancer agents in an innocuous manner toward safe tissues, (2) the efficient recognition of malignant specificities and (3) the controlled release of the parent drug exclusively at the tumor site. Within this framework, the use of antibody–drug conjugates (ADCs) targeting specific tumor-associated antigens is by far the best-explored approach. Many of these compounds are currently evaluated in humans, including Adcetris (brentuximab vedotin) and Kadcyla (ado-Trastuzumab emtansine) which reached the market in 2011 and 2013 respectively. However, the extension of this strategy is restrained by the effective amount of such complexes (antibody/ligand) to be internalized in the cell due to a relative instability in the physiological medium and their sensibility to several enzymes present in the tumor environment.

The goal of the project is focused on the therapeutic potential of original immune glycoconjugated-MoAb associating potent known glycosylceramide immunostimulants and available anti-EGFR MoAb: Cetuximab or Panitumumab.

We thus anticipate an optimization of the immune response efficiency by a control of the therapeutic doses restricting secondary effects and counteracting RAS mutation mediated resistance to MoAbs alone.

The chemical relevance of our project consists in the production of new glycoconjugated-MoAb complexes 1 by only using residues that have been already recognized to be by their own efficient and safe in previous anticancer therapeutic studies. All glycoconjugated intermediates 2-4 will be evaluated.-If data are convincing enough in preclinical models, the next objective will be to perform, in association with a major pharmaceutical company, a phase I trial in colorectal and lung cancer patients after failure of conventional therapy, including anti-EGFR MoAbs.

Molecular theranostics as well as the vectorization of therapeutics by enzymatic-responsive prodrugs represent two extremely promising thematic fields which pave the way of new therapeutic opportunities for the identification of new targets. The project aims to produce a biocompatible platform associating a drug and a fluorogenic probe, both programmed to release concomitantly by an enzymatic triggering. This innovative theranostic system will provide real-time information in a non-invasive way on the process of release of the active drug and its biodistribution in the close environment of the biological target.

5. Design and synthesis of neonicotinoid type insecticides and quinuclidinic compounds as ligands of insect nAChRs

Insect nicotinic acetylcholine receptors (nAChRs) are a recognized target for insecticide design. Among compounds targeting insect nAChRs one sub-class of group 4 (IRAC classification), the neonicotinoids, has been shown to have adverse effects, especially on beneficial insect species (pollinators) and their predators. With our biologist partner (Pr S. H. Thany, Orléans-F) we developed virtual or rational approaches to identify novel compounds with beneficial pesticide properties. In a first approach, it has been designed, from a structure-based approach using molecular modeling tools, ligands with increased selectivity for pests versus pollinators (honeybees).

A high-throughput virtual screening using a library of small molecules ( ZINC database), and thiacloprid as the pharmacophore model, afforded sixteen interesting small molecules. They were then docked in a6 cockroach and honeybee homomeric nAChRs to identify potential selective compounds. Among those, one original sulfonamide compound has afterward been synthesized, together with various analogs.

Two analogs of this series have been shown to behave as agonists of cockroach nAChRs through electrophysiological studies and their efficiency against pests has been confirmed using toxicity measurements whereas the compounds have been proven to be safe for honeybees on the basis of similar experimental studies.( 1. EP 18 306 468.2) In a second approach, we have developed novel quinuclidine benzamide compounds (LMA series) known as serotoninergic 5-HT3 ligands as well as human nAChRs ligands, and identified quaternarized and boran-complexe derivatives as potential insect nAchRs ligands or pesticide sensitizators. (2. PBP, 2020)