ModES • Investigating the chemistry of radionuclides

Within this research area, our work mainly concerns the use in oncology of the 211 radioisotope of astatine (211At) in nuclear medecine. The principle is to label, with this radionuclide, a biological vector that will target tumor cells and destroy them, thanks to the alpha particles emitted during the nucleus decay. However, the binding of biomolecules with 211At remains a challenge that requires a minimum of understanding of the astatine chemistry (many of the basic chemical studies were set aside due to the few amounts of available astatine).

Working in close collaboration with the radiochemistry group at SUBATECH laboratory (UMR 6457), the team investigates the basic chemistry of astatine using quantum chemistry tools. The team expertise is also built through methodological developments (see Axis-1) in relativistic calculations and through the study of other radionuclides (44Sc, 210Po, 223Ra…).

Before studying the astatine reactivity, one need to identify the chemical forms of astatine in the experimental conditions. Our team is working on establishing the Pourbaix diagram in non-complexing aqueous medium (Figure below, r.h.s.). Astatine differs from the other halogens by the existence of thermodynamically stable cationic forms, At+ and AtO+, in oxidizing and acidic conditions. In addition, the AtO+ cation reacts with water to form the AtO(OH) species. The constant of the hydrolysis reaction is particularly high (~10-2), without equivalence in the literature for other singly charged cations!

We are also interested in the solvation of AtO+. The modeling results (Figure below, l.h.s.) reveal a change of spin state between the gas phase (triplet ground state, preventing any reaction with most of the chemical compounds) and the aqueous phase (singlet ground state): the solvation reawakens the AtO+ reactivity! This unique behavior may explain the lack of reproducibility for some experiments involving astatine. 211At is produced within cyclotrons and then it is either directly extracted within acidic aqueous solutions, or evaporated in gas phase followed by a condensation process in solution. The kinetic parameters ruling the conversion from At in the gas phase to the solvated singlet-spin AtO+ species being unknown, the astatine reactivity may behave differently according to the production protocol ("wet" extraction/gas phase distillation). 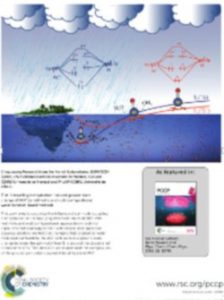 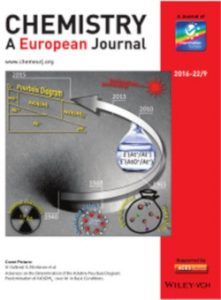 2. Characterizing the nature of At-bonds

Previous quantum chemical calculations have evidenced the influence of the relativistic effects, notably the spin-orbit coupling (SOC), on the astatine reactivity. This theme contributes at revealing both the nature and the SOC effects on the chemical bonds involving astatine. Innovative theoretical tools locally developed (ELF and QTAIM topological analysis programs) have notably demonstrated that SOC is able to reverse the polarization of bonds, and to increases the ability of astatine to form charge-shift bonds. At–C bonds with sp3 carbon atoms are notably stabilized by the mechanism of charge-shift bonding.

As the heaviest (natural) halogen element, astatine in R–At compounds was expected to form molecular interactions through halogen bonding. We have performed the very first characterization of halogen bonds mediated by astatine, as advertised in the Nature Chemistry journal. Theoretical studies focused on SOC effects have also demonstrated an interplay between the charge-shift character of the R–At bond and the ability to form halogen bonds (r.h.s. Figure). 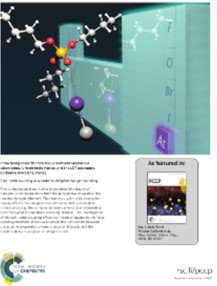 This theme is at the heart of the astatine project. The first studies, coupling radiochemistry experiments and relativistic quantum calculations, showed that the reactivity of both the At+ and AtO+ cationic forms are especially sensitive to solvation. The latter are supposed to be involved in current 211At-labeling protocols based on electrophilic substitutions. An apparent correlation has been evidenced between in vivo stability of 211At-labeled agents and the At–R (R = C, B) calculated bond enthalpies (Figure below, l.h.s.).

Furthermore, since astatine is positively charged in At–C bonds, while for stronger At–B bonds it bears a negative charge, this may lead to different stabilities in biological environment (vs. nucleophilic/electrophilic attacks). Given the importance of the At–C and At–B bonds for the labeling protocols under development, the revealed disparities should be considered for preventing in vivo deastatination.

With respect to the I–C bond, we have also shown that the At–C bond in astatobenzoate derivatives easily breaks in the presence of oxidants (Figure below, r.h.s.). The in vivo mechanism of deastination could be oxidative and could take place at the level of the lysosome when the 211At-labeled agent is internalized into the cell. 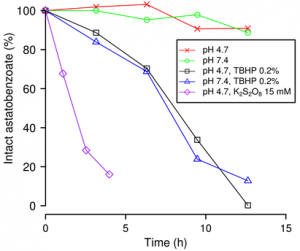 Among the radioisotopes employed for diagnostic and/or therapeutic purposes in nuclear medicine, we study the complexation of various radionuclides produced by the Arronax cyclotron.

Scandium isotopes such as 47Sc and 44Sc, are interesting both for internal radiotherapy (47Sc) and for pre-therapeutic dosimetric study that may be achieved through PET (Positron emission tomography) images obtained with 44Sc. 64Cu is another good candidate for molecular imaging and PET dosimetry.