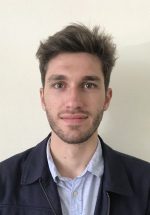 It is tantalizing to imagine integrated transparent solar panels in the windows to generate electric power while retaining natural lighting. Such applications would permit to broaden the applicability of photovoltaic and to produce energy with buildings. The topic of this thesis precisely focuses on this objective as it aim at the synthesis of selective NIR absorbing dyes in order to develop completely transparent and colorless dye sensitized solar cells (DSSCs). Firstly, we focused on two family dyes such as zinc phthalocyanine substituted with thioether unit and quadrupolar compounds with “A-D-A” structure. Even though these derivatives absorb selectively in the NIR region, the results obtained are quit disappointing with a power conversion efficiency (PCE) lower than 1%. Nevertheless, many improvment strategies are possible and are currently in progress.

In a second time, a new family of chromophore based on pyrrolopyrrole cyanines dyes (PPcys) were investigated. We, first, designed symmetrical sensitizers containing carboxylic acid function in each side of the cyanine backbone and photovoltaic study showed outstanding results, with PCE reaching to 3.85% with an AVT (average visible transmittance) of 65%. The structure of these dyes was then optimized, as one carboxylic acid unit was substituted by a tris-arylamine unit leading to three different asymmetrical derivatives. Photovoltaic properties were enhanced to 4.10%, which correspond to the highest value reported for a selective NIR dye. PPcy dyes were finally successfully implemented in DSP systems (dye sensitized photocatalytic) for solar driven hydrogen production demonstrating the capability of PPcy to reduce water with low energy photon (> 750 nm).