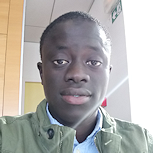 Astatine (Z = 85) is a radioelement whose 211 isotope is of great interest in radiotherapy. Besides its ability to form charge-shift bonds, astatine is potentially the strongest halogen bond donor since it is the most polarizable halogen element. Owing to its large nuclear charge, astatine also reveals relativistic effects that affect its chemistry. It is therefore relevant to investigate their influence on the halogen bonding properties. This work addresses particularly the role of the spin-orbit coupling by the mean of scalar relativistic and two-component density functional theory (DFT) calculations. Topological analyses of the density (QTAIM) and of the electronic localization function (ELF) are used to reveal the consequences on the nature of interactions and chemical bonds. It is shown that the mechanism of charge-shift bonding weakens the halogen bond donating ability of astatine. For instance, the halogen bond donor CAt4 eventually engages in weaker interactions than those formed by its iodinated analogue, CI4. We have also shown that the effects of spin-orbit coupling can be more marked on the halogen bonds formed by iodine, if its heavier counterpart, astatine, is in the near neighborhood. Considering the halogen bond donor At−CH2−I in interaction with the Me3NO Lewis base, the spin-orbit coupling weakens the halogen bond involving the iodine atom by 8%, while the effect is 2% on the interaction mediated by astatine. The delocalization of the spin-orbit coupling effects, originating from astatine, is rationalized from electronic effects and electronegativity differences.