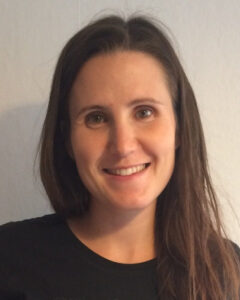 After studying chemistry at the École Normale Supérieure (ENS) in Cachan, Morgane Vacher moved to London in 2012 to complete a PhD degree in theoretical chemistry with Mike Robb and Mike Bearpark at Imperial College. Her thesis work focused on the new attosecond science and more precisely on the simulation of electron dynamics after ionization of molecules with attosecond pulses. The temporal resolution of attosecond pulses has opened the door to real-time observation and control of electrons, previously impossible. Following the completion of her PhD in 2016, Morgane completed a post-doctoral fellowship at Uppsala University in Sweden with Roland Lindh. There she worked on the simulation of chemiluminescence, which is the emission of light from a thermally activated non-adiabatic chemical reaction. This is the phenomenon that occurs for example in the firefly when the insect produces light.

Morgane Vacher was then recruited as a CNRS research fellow at the end of 2019 at the “Chemistry and Interdisciplinarity: Synthesis, Analysis and Modeling” (CEISAM) laboratory in Nantes. She works mainly on the simulation of photochemical processes, i.e. chemical reactions induced by photon absorption and electronic excitation. In particular, she develops and uses dynamics methods, in order to simulate the evolution of nuclei and electrons over time during a chemical reaction. Other projects also involve the simulation of X-ray spectroscopy and machine learning algorithms.

Light-initiated chemical processes are extremely widespread and their applications span vital areas of molecular research ranging from medicine to computing and energy conversion. However, photochemical reactions are limited by the nature and finite number of excited electronic states of molecules and therefore often lack control and selectivity.

To overcome this fundamental limitation, ATTOP proposes to bring recent technological advances in attosecond science to photochemistry and to explore the emerging field of “atto-photochemistry”. Indeed, light pulses of attosecond duration have a large spectral width and excite several excited electronic states simultaneously and coherently. This superposition, called “electronic wavepacket”, has a new electronic distribution and should therefore lead to a new chemical reactivity. Two key questions remain unanswered for the moment: what is the reactivity of a molecule in these new types of experimentally accessible electronic states? To what extent will the manipulation of an electronic wavepacket produced by an attosecond pulse transform the outcome of chemical reactions?

The emerging field of atto-photochemistry requires significant theoretical support from the outset. With a unique combination of expertise in both attoscience and theoretical photochemistry, ATTOP aims to accurately describe chemical reactions induced by electron wavepackets via attosecond pulses. The final goal is to develop a general know-how to design electron wavepackets and attosecond experiments thus transforming the result of photochemical reactions for various applications. In doing so, atto-photochemistry will revolutionize photochemistry, with a direct impact on many other fields of molecular science.