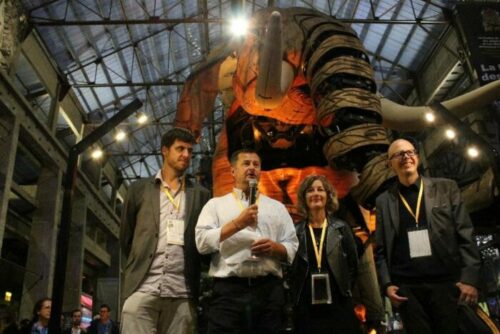 The Analytics 2022 conference took place in Nantes in September. Several CEISAM members have actively participated in its organization and its success, as members of the Organizing Committee, volunteers or speakers.

The congress, co-organized by the Francophone Network of Metabolomics and Fluxomics, the French Society of Proteomics, the French Society of Mass Spectrometry and the Francophone Association of Separative Sciences, was a great success by bringing together more than 650 participants at the convention Centre of Nantes, from September 5 to 8, 2022. The scientific program was rich and placed under the sign of interdisciplinarity, allowing the communities of the four societies to exchange on themes such as Omic sciences, multidimensional analyzes, data processing, imaging and the latest methodological innovations. An important place in the congress was given to convivial moments allowing fruitful exchanges between the delegates, such as the Gala dinner which took place at the machines of Nantes with a very special guest, as evidenced by the photo with the four organizing members, Hélène Rogniaux, David Ropartz (BIBS, INRAe), Bruno Le Bizec (LABERCA, Oniris) and Patrick Giraudeau (CEISAM). CEISAM’s participation in the congress was also marked by training on isotopomics, offered by Illa Tea, Anne-Marie Schophorst (CEISAM) and Guillaume Tcherkez (IRHS), an oral communication by Victor Ribay on hyperpolarized 13C NMR, and several poster communications. Several CEISAM members took an active part in the organizing committee: Julie Hémez, Marine Letertre, Serge Akoka and Jonathan Farjon.